I started writing when I was a child. I loved storytelling, and I was obsessed with books and 80’s cinema growing up. But I never really realized then that I wanted to be a screenwriter. I didn’t even know what that was. After I graduated with a BS from Florida International University Journalism/Broadcast school in 2003 and having the experience writing for entertainment television from WSVN 7 DECO DRIVE in Miami, FL, I realized I loved script writing.

But initially, I was afraid to write feature films. So, after some creative story ideas in mind, I wrote them as children’s books. But my love for screenwriting ventured back into play when the idea for MANO NERA, originally titled, BLACK HAND, came into my life divinely, which is another story for another time.

Logline: When his brother is killed, an Italian immigrant struggles with the decision to kill the man who called the hit: the head crime boss of Mano Nera (the Black Hand Society), who also happens to be his wife’s brother.

MANO NERA is a 129-page screenplay based on the true story of Samantha Caprio-Negret’s (one of the writers) Italian great-grandparents. Ultimately, it’s a time-period and a love story with the Black Hand Society (Mano Nera) as a backdrop; it has some unique twists, including how it begins in modern day Florida, flashbacking to 1917 in New Jersey. It intertwines two stories of two separate couples in different time periods, and how they correlate.

MANO NERA is a compilation of real-life events and some fictitious scenes and characters. There is no need to have the life rights on the characters in the script because they are all deceased, and all names have been changed. The main characters are based on the writer’s ancestors.

Facts have been taken from the book, Murders in Monmouth: Capital Crimes from the Jersey Shore’s Past (Ch.6 Revenge of the Farinella Brothers).

2018 CWA Finalists All Drama and Family 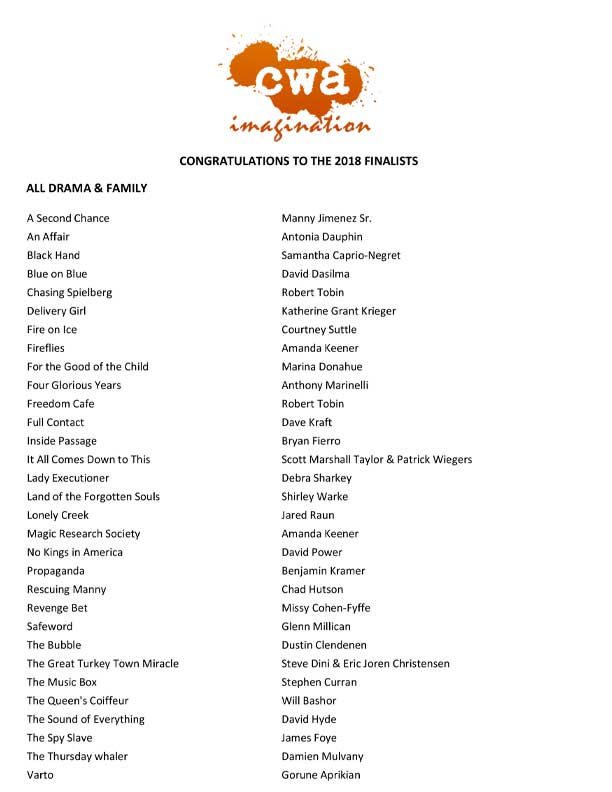 In modern-day Florida, Angelina Romano is on the verge of divorcing her husband, Michael. She seeks her parents’ advice; her father, Frank Azeglio tells her a true story about her great-grandparents… a story of deep commitment… a family secret of love, deception, murder, and revenge.

Salvatore Farina (27) and his older brothers, Joseph (29) and Gustavo (37), own and operate a produce store in Jamesburg, NJ in 1917. Gustavo is married to Francesca Farina. Gabriella and Francesca are first cousins. Gabriella has an older brother, Vincent Greco, who is a boss in the Black Hand Society (Mano Nera). That means Vincent and Francesca are also first cousins. That’s not stopping them from having an affair. They conspire to kill Gustavo and make it look like a robbery.

Vincent goes after the Farina’s grocery business. The Farinas realize Vincent had their brother, Gustavo, killed. The police are unable to help them. Gabriella confronts Francesca and Vincent about their affair and how it’s tearing their families apart. Vincent alludes to killing Salvatore and Joseph if they get in his way and incestuous relations with Gabriella. Gabriella always knew there was something dark and violent inside her brother. Salvatore comes home from work that evening to find his wife crying alone in the dark. When he asks what’s wrong, she tells him that he has her permission to kill Vincent because she fears that Vincent won’t stop till Salvatore and Joseph are dead.

Salvatore and Joseph purposefully run into Vincent at the Freehold farmers’ market, where merchants of all ethnicities gather to sell their goods. In an effort to protect his brother, Salvatore sends Joseph to the other side of the market and lures Vincent away. Salvatore instructs Vincent to turn his truck down a dirt road. Vincent, wise to Salvatore’s ruse, pulls a gun on Salvatore. Joseph had seen them leave the market and catches up at this point. Vincent pulls the trigger, but his gun jams. Salvatore pulls out his gun, sticks it under Vincent’s chin, and fires. The bullet enters the bottom of Vincent’s chin and exits his mouth taking teeth with it. Injured, Vincent exits his truck and runs for his life. Salvatore quickly catches up with him and shoots him five more times. Joseph catches up to Salvatore just in time to see him put the last four bullets into Vincent. Salvatore is still pulling the trigger even though the gun is empty. Joseph grabs Salvatore by the shoulders and tells him Vincent is dead. Salvatore tells Joseph to go and grab the gas can out of the truck. They dowse Vincent’s body, set it afire, and watch him burn.

The police find evidence and witnesses linking the Farina brothers to Vincent’s murder. The trial begins on November 13, 1917 and lasts three days. Their defense attorney makes every attempt to discredit the witnesses and facts in evidence. After two hours, the jury finds Salvatore and Joseph guilty of the murder of Vincent Greco and recommends a life sentence without the possibility of parole for each.

Salvatore tells Gabriella to forget about him and meet someone else who can be a good husband to her and a good father to their children; she refuses.

Salvatore with Joseph’s help runs crooked card games in prison. He sneaks the money out to Gabriella in gum wrappers and cigarette packs. Salvatore’s card games gain the attention of Tony “The Clip” DiAngelo, a made guy in prison. Tony tells Salvatore that he got a ‘pass’ on Vincent’s murder because what Vincent did is an infamia. Tony tells Salvatore that he can use a man like him; that he can make Salvatore’s family more comfortable while he’s in prison. Salvatore discusses the offer with Gabriella. She reminds him that the Black Hand Society is the reason they’re in this dilemma. Salvatore is conflicted because he wants his family taken care of, but Gabriella convinces him that nothing good can come from joining Mano Nera.

Salvatore and Joseph are in jail for twelve years. One day, Gabriella visits Salvatore in prison and tells him that he’s being released. Gabriella reveals that she’s been paying off the judge to commute their sentences with all the money Salvatore had been slipping her.

Salvatore and Joseph are released from prison. They sell the properties that were once their grocery store and homes, move the whole family to Florida, and open a motel business. Salvatore and Gabriella have another child. That child is Frank Azeglio’s mother.

Frank Azeglio takes a sip of the hot cup of coffee his loving wife just brought him. Angelina is in shock. “So, what you’re saying is that if Salvatore and Gabriella hadn’t stuck together through that awful ordeal… “Frank interrupts, “That’s right, my mother would never have been born, which means you and I wouldn’t be alive to have this conversation. These days everyone is so quick to get divorced; they forget family is supposed to come first, that when things are at their worst, it’s family you can still count on. They forget… Monday morning always comes, honey. In other words, when you first fall in love, it’s like a fun weekend, but eventually the fireworks die down and your left with each other. If you still have what it takes when reality hits, then you have what it takes to make a marriage work. Is Michael your Monday morning?”

Angelina goes home and she opens the door to find Michael sitting on the couch, holding a dozen red roses with a loving smirk on his face. She looks at his pleading, puppy-dog eyes and can’t help but smile back.

Logline: After a tragic accident leaves her without her best friend, 10-year-old Seraphina discovers a magical world inside a rainbow and must complete an epic quest…with the help from a warrior fairy and unicorn she unknowingly birthed. 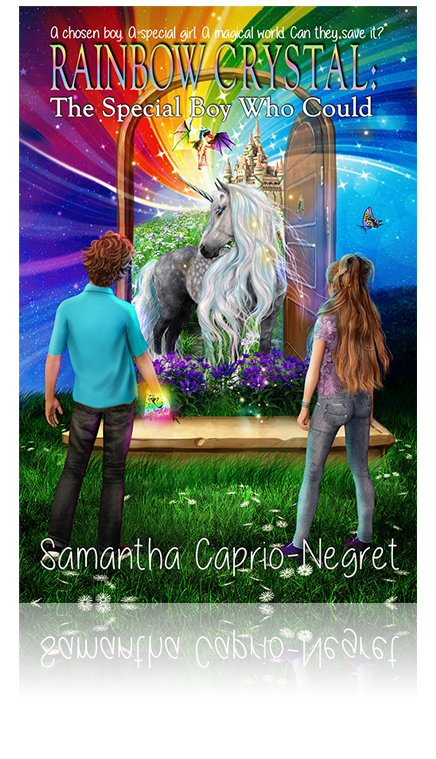 All ten-year-old Seraphina wants is to make a friend, because starting out in a new city and school can be scary for anyone, especially for an insecure, young girl who doesn’t make friends easily. After all, Seraphina doesn’t feel like she is anyone special. That is until she meets the best friend of her dreams – eccentric, fun eleven-year-old Josie Lee who makes her feel like she’s the best thing since sliced chocolate cake. Late-night pillow-fights, Ouija-board fun, sneaking out, and deep conversations about the supernatural, lead them to become inseparable with a special bond. They even call themselves soul sisters.

One day, an innocent visit to a metaphysical store ends with a psychic reading that has them making a wish on a shooting star of their truest hearts’ desire. They yearn to escape their realities by venturing inside a world of a rainbow. After making the wish, everything changes… and not in a good way. Fate has other plans. Shortly after, Josie Lee is killed, being struck by a car. Seraphina is left behind devastated, heartbroken, and hopeless.

Walking home from school one day, Seraphina stumbles upon a talking butterfly named Sebastian. He tells her that she is the “chosen one” and that it’s of the utmost importance for her to come with him inside his magical world called Raiven to help save it (much like the one they wished to enter). Seraphina finds herself on a mission to gain order back to Raiven with its six different, colored- realms by returning a powerful rainbow crystal to its wizard owner, Arbit Maximus, which was stolen by the evil witch, Alyssa, and her ugly, drooling trolls. Alyssa and her trolls, along with the power of the crystal, have the potential to take over Raiven and even planet Earth, causing evil to rule and chaos throughout both worlds.

While on her journey, Seraphina encounters many tests, but also mystical creatures whom she befriends and who help her on her mission. There’s Noah (the warrior fairy who protects her), Queen Ivy (the queen fairy of Fairyland), Stella (the unicorn Seraphina unknowingly birthed through her wish on the shooting star who Seraphina communicates with telepathically), the magical elves and dragons who fight alongside her, ultimately defeating Alyssa and her trolls. Most importantly, Seraphina learns that Josie Lee is there with her as her spiritual guide, assisting her in making the right decisions and leading Seraphina to her goal and safety.

In the end, Seraphina returns the rainbow crystal back to Arbit Maximus on the highest realm in Raiven (the violet realm). Her lesson is that Raiven is a world between heaven and earth, and that all living creatures are connected. Humans are usually not able to see it, but doesn’t mean it doesn’t exist, unless their hearts and minds are open to it. The message is to believe that magic is possible and to never ever lose hope, and that there is no end after all.

You can find Samantha’s platforms as a screenwriter through: 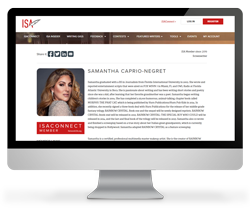 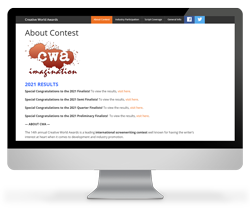 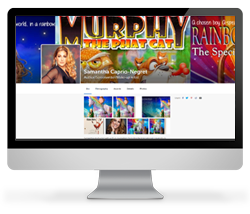