Check it out here:

Check out the podcast I did with Jed Doherty called:

“Reading With Your Kids — The Start of a Beautiful Conversation”

OJ Simpson, Bill Cosby, Harvey Weinstein, Donald Trump, R. Kelly, directors in Hollywood, Fashion designers, the list goes on and on, etc… different crimes to different degrees, but all men with money in powerful, high-public figure positions = common denominator. Most of them still walking around, not a care in the world, and/or with no accountability. What’s even worse, people protecting them; protecting the monster, even defending them still. Where’s the hashtag for that?

We continue to protect them because it’s all about money and power. By losing them, we’re losing both. Bottom line. By admitting that those we once loved, admired, and adored, we’re admitting they have a dark, shadow side, and by acknowledging the monsters inside of them, we question our own dark side and character. What does that say about us? How could we not see it? How could someone we love, admire, voted into office, listened to their music, watched their movies, worn their clothing line, etc… have such ugly, horrific capabilities? So, we don’t admit it. We turn our heads. How could we “possibly” be wrong? No. No. No. So, we make excuses for behaviors that are so obvious, because it’s easier than admitting we could be wrong or they could’ve fooled us. But, it’s not about us nor should it be. Truth be told, we’d rather be right than fight injustice. The ego wants to stand its ground. Yup! So in the end, righteousness wins. The ego is a very powerful thing! Not to mention, these individuals are or at one point have been contributors to society. By acknowledging their faults, we’re omitting their contributions somehow — many of which were substantial and influential to us growing up and/or milestones in our lives. By this, we feel a loss if we must let it/them go. So does that mean, “Bye, bye, forever?” Do I have to say goodbye to the musician that sang the song I danced to at my wedding or at church on Sundays, or to the movie producer who produced the movie that changed my life? What about the football player who broke athletic records, and made me feel like superheros exist? Or the man/leader that I trusted so much so that I voted him as GOP to rule over all of America and entrust with our lives. So, really we make it about us, not them; we’re just a mirror image. Until we are conscious, aware, and take action against outrageous behaviors (because TRUTH, they’re ‘so’ outrageous), we’re no different than the people committing the crime or abuse. But until something is done, it will be continued. Then, we are just defending and protecting the monsters, not the victims. There’s right and wrong. There’s no middle-ground. It’s simple. What a shame! What about them? Aren’t they important? Don’t they matter? Maybe we would if they had money or power, a different skin color, race, or sex? They should! They are people with feelings and emotions. By not seeing or hearing their cries, we’re just committing another hateful crime…indifference.

On Martin Luther King, Jr. day, I honor his teachings…we should have learned a thing or two by now. When is enough enough? 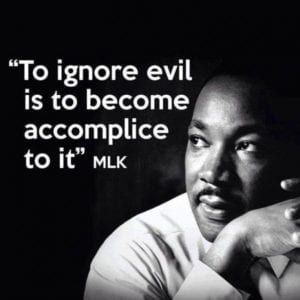 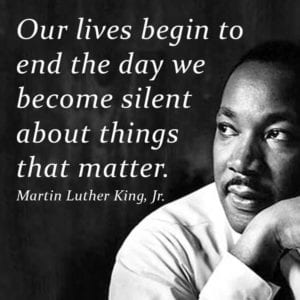